Miracle in the Andes by Nando Parrado | Book Summary 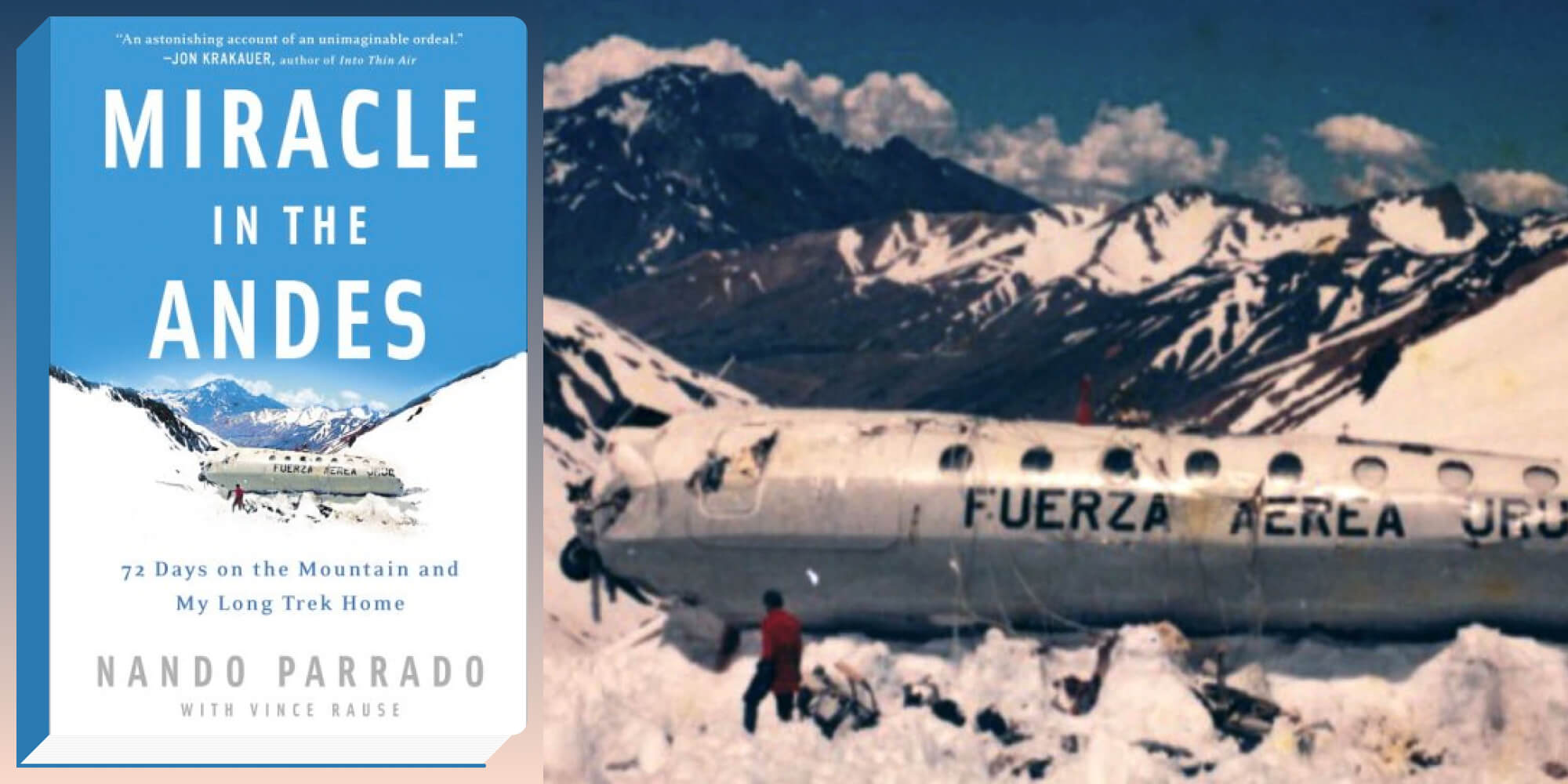 “Miracle in the Andes” by Nando Parrado is one of the most interesting books I read this year. I was hooked and binge read this despite being based on real events with known outcomes (I stayed away from them though). It is a true testament to the grit, resilience, moral dilemmas and a superhuman escape from jaws of certain death.

Miracle in the Andes (Nando Parrado with Vince Rause) – ★★★★

What’s This Book About?

In 1972, a plane carrying 45 people including members of a rugby team, family, supporters and 4 crew members from Uruguay crashed in the Andes. Of those, only 16 made it out alive after 72 days in treacherous conditions.

“Miracle in the Andes” is a first-person account of those 72 days written by Nando Parrado, one of the survivors and hero of the story. It’s been published 30 years after the incident, and Nando tells his story with great depth accounting his own emotions throughout.

Nando begins by laying the groundwork for the story. He describes the history and culture of his rugby team – Old Christians Rugby Club based in Montevideo, Uruguay. He writes about the details leading up to the crash.

The crash occurred on the 13th October, 1972. There were 45 people on the plane. Some members of the Rugby club, family and supporters, and 4 crew members including 2 pilots. Due to a navigational error by the pilot, they descended to an unsafe altitude where the mountains were obscured by the bad weather conditions.

The plane clipped a mountain and broke into two parts. The fuselage skidded and landed in the glacier at an altitude of around 3,500 mt in the Andes. The tail section stopped some distance apart. 32 people survived the impact, some severely injured and died a few days later including Nando’s mother and sister. Nando was in a coma for 3 days due to a skull fracture.

They ran out of food in a few days. At that point, on the verge of starvation, they had to make a morally difficult decision to eat the flesh of their dead friends in order to survive further.

17 days after the crash on 29th October, an avalanche buried the fuselage in snow and killed 8 people. They dug out the snow to create a tunnel couple of days later, but had to remain in the fuselage due to a blizzard.

Some of the survivors tried expeditions on the west and east of their location but they suffered from altitude sickness, dehydration, snow blindness, malnourishment, and the extreme cold during the nights.

On 12th December, 60 days after the crash, Nando, Roberto and Antonio decided to climb the mountain on the west side in order to escape – without any climbing gear, protective clothes or mountaineering experience of any kind. On reaching the peak, Antonio returned to the fuselage while Nando and Roberto carried on.

Both of them came across some people after trekking for over 10 days and travelling 60km. They informed the army nearby. Nando guided the helicopter rescue teams to the crash location. On 23rd December after 72 days in the snow, all 16 survivors were rescued.

How I Came Across This Book?

In my daily ritual of doom-scrolling on Reddit, I came across a post on r/Damnthatsinteresting about the incident. The post summarised the incident with emphasis on how the survivors had to resort to cannibalism in order to survive for 72 days in the snow.

One comment recommended this book written by one of the survivors. I decided to buy the book and dive into it straightaway without probing any further on the topic – to not spoil the fun of reading the book.

Why I Liked This Book?

There have been numerous documentations of this incident including a movie called Alive (1993) starring Ethan Hawke and a book titled Alive: The Story of Andes Survivors which recounts the events of the incident based on extensive interviews with the survivors following the incident.

What makes Nando's retelling unique? Unlike the book Alive, in his book, Nando writes about his personal experiences, the inner battles, the psychological effects of the events during and after. His version of the incident gives the whole ordeal a touching, human side of things.

Other Books, Movies and Documentaries on the Crash

Apart from “Miracle in the Andes” by Nando, Roberto Canessa who accompanied Nando in the trek, and Eduardo Strauch also published books with their versions of the entire ordeal. Some other notable works are listed below:

I Had to Survive (Roberto Canessa)

Out of the Silence (Eduardo Strauch)‍